Alexander Wilder on Pagans and the Value of the Classical Religions 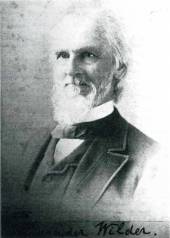 The term Pagan, or paganus originally meant, an inhabitant of the village, i.e., a peasant), but now refers to everything considered not only perverted to the sacerdotal theology of the Church of Rome, but heretical and heterodox. Therefore, what is considered perverted must come from the devil, hence, idolatrous, pagan, &c. The Jews, Christians, and Muslims perpetuate narratives, that are not entirely an accurate picture of the classical world, from which they’ve emerged victors. The victors tried to smother the old truths.

Helena Blavatsky stated that if the scientific etymology of the term pagan means anything, she’d rather be a pagan with the peasants among the people of the fields, rather than a Roman Catholic amidst the Princes of the Church. She adds, in color, “of whom I take very little notice so long as I do not find them in my way” (H.P. Blavatsky, Reply of Abbé Rocca, Collected Writings, Vol. IX., pp. 377-378)

The term paganism, Alexander Wilder remarked, had degenerated into a slang of opprobrious (scornful) meaning. The scholar of Platonism said that the correct term would be the “ancient ethnical worships.” On the one hand in old Jerusalem, you had the dogmatism and bigotry of the Synagogue, and on the other, Paganism so-called, with its deities and sub-deities. Its philosophical truths were concealed under what is popularly known as the MYSTERIES.

“Mr. Knight suffered, as all men must, for cultivating knowledge and promulgating sentiments at variance with the popular idea. (…) Facts were disclosed in regard to the arcana of religion, which the initiated had before seriously kept vailed from popular knowledge. Mr. Knight had endeavored to present to scholars a comprehensive view of the origin and nature of a worship once general in the Eastern world; but it was easy to perceive that many of the elements of that worship had been adopted and perpetuated in the modern faith by which it was superseded. (…) Opinions and institutions are not revolutionised in a day, but are slowly modified by reflection and experience. Religion, like the present living race of men, descended lineally from the worships of former time with like elements and operations. Names have often been changed where the ideas and customs often remained. But men fail to think deeply, and are impatient of any newly-presented fact which renders them conscious of having cherished an error. Instead of examining the matter, they often seek to divert attention from it, by vilifying the persons making the unwelcome disclosure.” (Alexander Wilder, MD., Preface to Symbolical Language of Ancient Art and Mythology)

In the same passage, Alexander Wilder notes that scholars in the field discouraged, and tried to accuse the work of Richard Payne Knight as “improper.” Yet, there was nothing incorrect of his findings.

“has degenerated into slang, and is generally employed with more or less of an opprobrious meaning. The correcter expression would have been ‘the ancient ethnical worships,’ but it would be hardly understood in its true sense, and we accordingly have adopted the term in popular use, but not disrespectfully. A religion which can develop a Plato, an Epictetus, and an Anaxagoras, is not gross, superficial, or totally unworthy of candid attention. Besides, many of the rites and doctrines in the Christian as well as in the Jewish Institute, appeared first in the other systems. Zoroastrianism anticipated far more than has been imagined. The cross, the priestly robes and symbols, the sacraments, the Sabbath, the festivals and anniversaries, are all anterior to the Christian era by thousands of years. The ancient worship, after it had been excluded from its former shrines, and from the metropolitan towns, was maintained for a long time by the inhabitants of humble localities. To this fact it owes its later designation. From being kept up in the Pagi, or rural districts, its votaries were denominated Pagans, or provincials.” 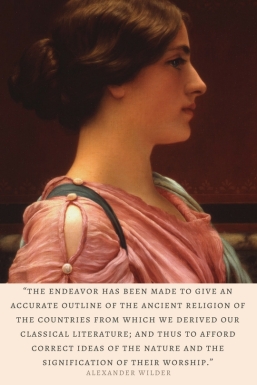 “The endeavor has been made to give an accurate outline of the ancient religion of the countries from which we have derived our classical literature; and thus to afford correct ideas of the nature and the signification of their worship.” (ibid., vi.)

I Must Necessarily Be Pagan

Blavatsky, H.P., The Theosophical Glossary: “PAGAN (Lat.). Meaning at first no worse than a dweller in the country or the woods; one far removed from the city-temples, and therefore unacquainted with the state religion and ceremonies. The word “heathen” has a similar significance, meaning one who lives on the heaths and in the country. Now, however, both come to mean idolaters.”

“Being neither Christian, Jew nor Mussulman, I must necessarily be pagan, if the scientific etymology of the term means anything (…) What is the origin of the word pagan? Paganus meant, in the first centuries, an inhabitant of the village, a peasant if you like, one who by living too far from the centres of the new proselytism had remained (very fortunately for him, perhaps) in the faith of his fathers. According to the Latin Church, all that is not perverted to the sacerdotal theology is pagan, idolatrous, and comes from the devil. And what does Roman etymology, whose adoption was imposed upon other peoples by circumstances, matter to us? I am democratic, in the true sense of the word. I respect the country folk, the people of the fields and of nature, the honest labourer scorned by the wealthy. And I say loudly that I prefer to be a pagan with the peasants than a Roman Catholic with the Princes of the Church, of whom I take very little notice so long as I do not find them in my way.” (Helena P. Blavatsky, Collected Writings, Vol. IX, pp. 377-78)

View all posts by Dominique Johnson